Rosemarie Lopes of New Bedford, presented with $10,000 donation for the Veterans Transition House

FOXBOROUGH, Mass. – For the past 25 years, the Kraft family and the New England Patriots Foundation have been recognizing volunteers for going above and beyond to give back to their communities through the Myra Kraft Community MVP Awards program. Formerly known as the Community Quarterback Awards, this volunteer recognition was renamed in 2011 in memory of Myra Kraft.

On Wednesday, June 8, 26 volunteers were recognized for their contributions at an awards ceremony at Gillette Stadium. In total, $275,000 in donations were distributed to the nonprofits represented by each volunteer. Twenty-five organizations each received $10,000 and the Grimes King Foundation for the Elderly received this year’s grand prize of $25,000.

“Of all the community initiatives we support through the Patriots Foundation, this was always Myra’s favorite and I am proud that we continue to honor her legacy of volunteerism by recognizing the amazing work of dozens of volunteers each year,” said Patriots Chairman and CEO Robert Kraft. “She loved meeting all of the honorees and hearing their heartwarming stories of volunteerism. There are so many people doing great things in our communities. It restores all faith in humanity. We enjoyed reviewing this year’s applications and selecting the 26 dedicated individuals that are helping to make the world a better place.”

Gillette, a longtime supporter of the New England Patriots and a cornerstone partner of the Patriots Foundation, served as the presenting sponsor for this year’s program. On hand to congratulate the award winners were Robert Kraft, President of Kraft Family Philanthropies Josh Kraft, Patriots, College and Pro Football Hall of Famer and Patriots Executive Director of Community Affairs Andre Tippett and John Claughton, VP of Grooming, North America, Procter & Gamble.

“This program has always been my family’s favorite charitable initiative,” said Josh Kraft. “Each year, we read hundreds of heartfelt stories of volunteerism and we are honored to celebrate those who go above and beyond to help others. We were excited to partner with our good friends at Gillette for this year’s program and appreciate their shared commitment to building stronger New England communities.”

“As a long-time witness of the great and positive impact the Kraft family has had on the New England community, Gillette could not be more proud to share in honoring Myra’s legacy as the presenting sponsor of the Myra Kraft MVP Awards,” said John Claughton. “Joined by the same drive to be a force for good for the communities we serve, Gillette looks forward to supporting all the honorees and volunteers that continue the work Myra so passionately championed.”

Rosemarie Lopes of New Bedford, Mass. was recognized as one of this year’s honorees and presented with a $10,000 donation for the Southeastern Massachusetts Veterans Housing Program.

As a first-generation Cape Veridian woman, Rosemarie served as a sergeant in the United States Marines, earning numerous medals for her efforts. For more than 10 years, she has served in a different capacity – as a board member for the Southeastern Massachusetts Veterans Housing Program, providing critical services to more than 1,000 veterans.

“Because the combat they’ve experienced and the war tragedies they’ve witnessed oversees, U.S. veterans, their service and their struggles are often overlooked by many Americans,” said Rosemarie. “The Southeastern Massachusetts Veterans Housing Program welcomes homeless veterans into facilities such as the Veterans Transition House and provides them with not only shelter but also independent living skills, rehabilitation and re-integration into the community.”

Rosemarie has played an instrumental role over the past five years as board president, guiding the nonprofit through a major campus expansion. But her efforts don’t stop there. She has also volunteered for the United Way, was appointed to the Governor’s Merged Market Advisory Council and is always looking for ways to give back.

“I am so grateful to the Kraft family, the New England Patriots Foundation and Gillette for their recognition of the challenges so many veterans face and their support of the Southeastern Massachusetts Veterans Housing Program,” said Rosemarie. “It’s humbling to represent this organization that means so much to so many who have sacrificed for our county, as well as to the southeastern Massachusetts community. I’m honored to accept this generous donation on the Veterans Housing Program’s behalf, knowing that it will help the program continue and further its good work. Thank you for this wonderful award, thank you for your support of veterans and thank you for contributing so much to the success of volunteer efforts throughout New England.”

Since its inception, the Myra Kraft Community MVP Awards program has recognized more than 450 volunteers and donated more than $3 million to support nonprofit organizations across New England. 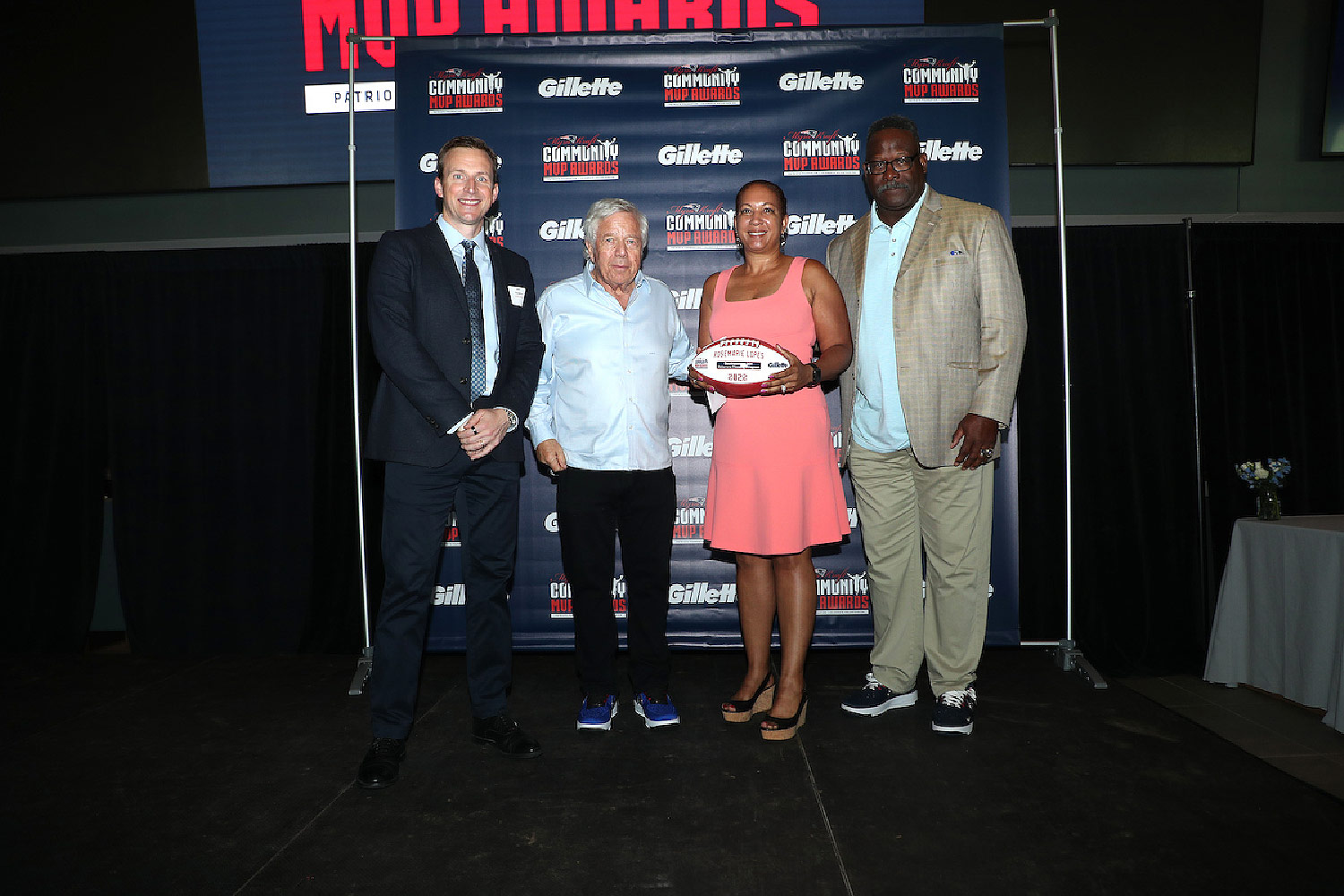 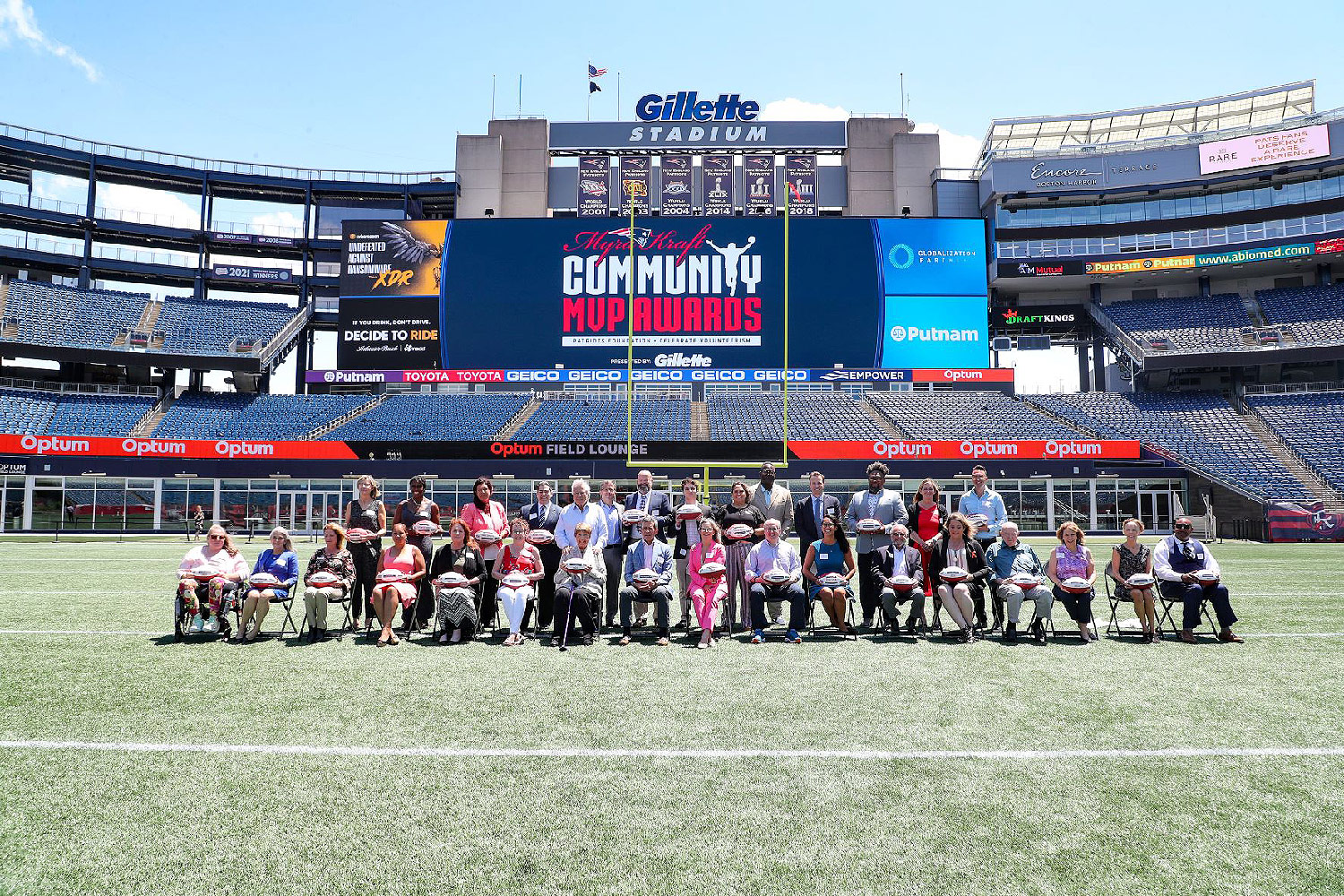