NEW BEDFORD — Veterans Transition House‘s 2022 Veteran of the Year Rebecca Mann, 38, of Plymouth, enlisted in the Army in 2005 at age 21 with a plan to get out in four years and carry on with civilian life. However, her exit back to that life wouldn’t come when — or how — she’d envisioned.

“I injured myself on my second tour in Afghanistan and was medically retired in 2016,” Mann said. “It was an accidental injury…. I hurt my foot. I didn’t think it was that bad.” 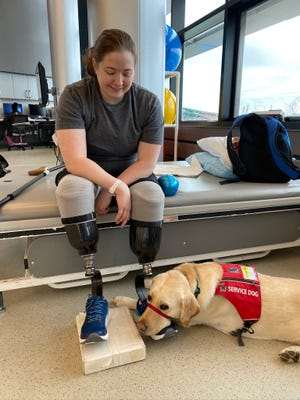 In a whirlwind medical journey through the next few years, complications would mount — and mount again — to the point Mann would ultimately have her left foot reconstructed, only to later have it amputated, followed by her right foot in 2020.

”They’re not really sure what caused it,” she said of issues that led to her second amputation. “I guess I’m the poster child for ‘don’t ignore an injury.’“

Luckily for Mann, by then she’d already gotten Sully, her service dog, in 2019. And so began Mann’s current career path with Mission Working Dogs — a company started by a close friend, based in Maine. She had also found her other love by then: sled hockey.

“A very good friend of mine … that I met through sled hockey — also a double amputee, also former Army — started Mission Working Dogs in 2020 and asked me to come on as vice president and veterans advisor,” she said. “I said ‘yes,’ of course, because Sully has done so much for me that the thought of helping other people the same way — there’s nothing greater than that.”

Mann describes Sully — a yellow labrador retriever — as a dedicated working dog with a goofy side reserved for off-hours. “Sully’s a big goof-ball. When he’s working, he’s all business, but when he’s not, he’s silly. He keeps me laughing,” she said. “Sully is a mobility assistance dog and also a trauma assistance dog, so he does everything from picking up dropped items to opening doors, turning on lights, he helps me if I’m on the floor for some reason — I can brace on him to get up; he also has specific tasks to assist with PTSD.

“And obviously he’s adorable and cuddly, so he has that going for him, too.”

As veterans advisor for Mission Working Dogs, part of Mann’s work is helping fellow vets through the application process for getting a service dog while finding ways to eliminate as much of the financial burden as possible when money is an issue. Given the newness of Mission, it’s a task that can be challenging, but Mann says the company has found ways of making it work. “We’re working towards our accreditation which takes a couple of years, so until we have that, we don’t have the federal subsidy for veterans,” she said. “So we’ve reached out to several organizations which assists us to make sure that when a veteran in need applies with us, that we try to get them a grant so they don’t have to pay anything out of pocket.

“Obviously, as a veteran-owned organization, we love when we have veteran applicants so we can help our own, so to speak.”

Mann said Mission also advises applicants on self-fundraising and offers the opportunity to assist on the company’s fundraising efforts to earn credit toward expenses.

When Mann isn’t on the job with Mission, much of her time is spent on sled hockey as captain of the Spaulding Shamrocks and a coach for Spaulding’s Boston-based youth and community hockey program. In August, Mann was also picked as captain for the first Para Ice Hockey Women’s World Challenge in Green Bay, Wisconsin. But given her reputation on the ice, the origin story of Mann’s adaptive sports career may be surprising. “I had never watched a hockey game in my life,” Mann laughed. “It’s the first adaptive sport I ever tried and I didn’t want to go, but I had a couple friends who kept bugging me to try it. … Now it’s like hockey has totally consumed my life and I’m obsessed with it. So, sometimes you just need a little push.”

While she clearly hasn’t let her double-amputee status impede her in pursuing new endeavors, Mann’s physical condition is far from a distant memory. “I still have to go to the hospital every couple of months for a week-long infusion to try to keep the circulation from the vessels open,” she said. “I feel like I’m constantly trying to figure out my new normal. … I don’t really know what the day brings — I can have a really good day and the next day have to use my chair. It depends on how my legs want to cooperate, so I just sort of go with the flow.”

When it comes to her status as Veterans Transition House’s 2022 Veteran of the Year, Mann says she was “blown away” by the news. “I knew I’d been nominated but I didn’t anticipate being selected,” she said. “I don’t particularly love attention, but it’s sort of one of those things where I think it’s a good way to highlight some great organizations that help veterans.” 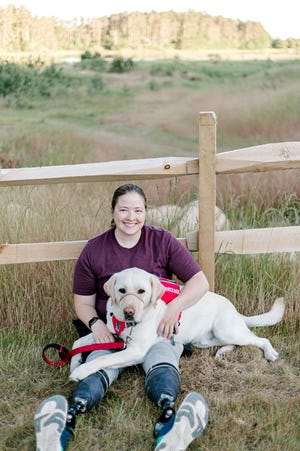 David Guertin, a consultant serving as development director to the Veterans Transition Center, said proceeds from the upcoming 27th annual Veteran of the Year Reception and Dinner on Nov. 9, at Rachel’s Lakeside in Dartmouth, will help the VTH to purchase a new hybrid vehicle, as well as support efforts to form connections with other community organizations. “Veteran of the Year has evolved into a fundraising event, and transportation is such an important service that we provide our veterans,” Guertin said.

WHAT: 2022 Veteran of the Year Reception and Dinner

WHERE: Rachel’s Lakeside, 950 State Road, Dartmouth DETAILS: The Veteran of the Year Award is presented to a Southeastern Massachusetts veteran in recognition of their outstanding contributions to veterans, veterans’ issues, and the community as a whole.
Ticket prices to attend are as follows: